Abood did not abide.1 As I explained elsewhere,2 teachers unions and union activism will survive the Janus decision that ends mandatory representation fees for public employees who are not members of unions that represent their bargaining unit.3 When I was thinking about the post-Janus world, I thought primarily of the broader strategies of unions that could no […]

I was sorry to hear earlier this spring that my former colleague Erv Johanningmeier had died. As the chair of a search committee in 1996, he was responsible for Barbara Shircliffe, Chris Ogren, and my coming to the University of South Florida.1 In my job interview I found a gruff, intellectually curious future colleague who […] 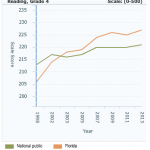 Different ways to think about the “Florida package”

My second email Q&A over Florida’s recent reform history is up at Valerie Strauss’s blog. I’m flattered that she calls me an expert on Florida reform. I’m more of a scholar of accountability who was also a local observer for 18 years, and one of those who have written about the state’s education reforms. (See a […]

Jeb Bush and me

Well, no, not really. While he was governor, Jeb Bush and I had one short e-mail exchange, about a disability policy issue. That’ll prove disappointingly mundane if it’s in the cache of emails that Bush’s office has already released or will soon be releasing. But I do have a written record of comments on Jeb Bush as […]

That’ll teach me to write last month about why no one is challenging Florida’s large voucher programs: by the end of the month, those voucher programs became part of an amended complaint filed by the lawyers in a “sweeping lawsuit” claiming Florida’s K-12 system is currently being run unconstitutionally (sweeping is the word used by the […]