I haven’t gone this long without a blog entry in … hmmn. Don’t know how long, maybe not since 2003. My wife was hospitalized in late August, and until she came home last Wednesday, I have been juggling essential tasks like mad and jettisoning whatever was absolutely unnecessary for the time being.1 She’s much better, thank you, and […]

My advisor was Michael Katz, a social historian who taught and wrote about education, social structure, cities, poverty, and public policy at the Ontario Institute for Studies in Education, York University, and the University of Pennsylvania from the late 1960s until his death this past week.

Posted in Personal, The academic life

Miscellaneous notes on the transition to Arizona

June 30 is technically my last day as a faculty member at the University of South Florida. I’ve been unpaid for June and living in Arizona for a little over two weeks, and my official USF emails have dwindled to a trickle, mostly erroneous bureaucratic missives (TRAVEL AUTHORIZATION FOR SOMEONE IN A DEPARTMENT THAT YOU […] 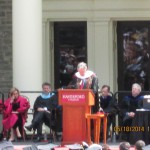 Above, my view of William Bowen yesterday At yesterday’s Haverford College graduation, one of the honorary degree recipients was William Bowen, former president of Princeton University and longtime head of the Mellon Foundation (from 1988 to 2006). He took the opportunity to talk about the controversy at Haverford over the granting of an honorary […]

Ten things I will miss about Tampa and Florida

If one were to rely on pop culture, you might get the following impression of Tampa: The Daily Show Get More: Daily Show Full Episodes,Indecision Political Humor,The Daily Show on Facebook